Blog 4 – the importance of the triangulation 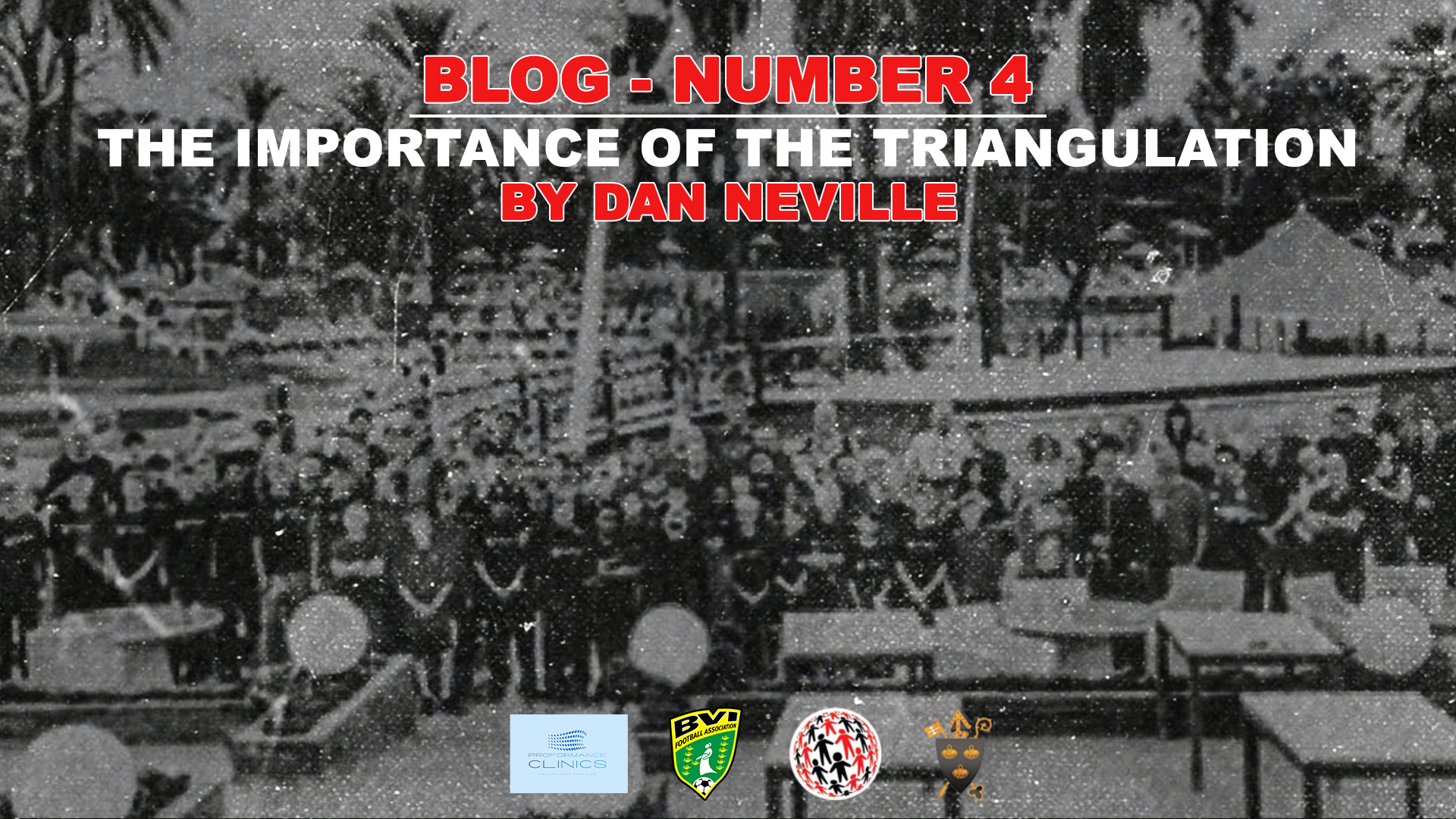 08 Feb Blog 4 – the importance of the triangulation

Posted at 09:17h in Uncategorised by Dan Neville 0 Comments
0 Likes

Blog no 4 – The importance of the ‘triangulation’

For blog number 4 I cover the ‘triangulation’ between the player, the parent and the coach. This vitally important combination will ultimately play a huge role in the development of a player. For the player to fully realise their potential this combination must work in unison. In this piece I will focus on the role of the parent in the triangulation.

The importance of the ‘triangulation’
As I alluded to earlier the importance of the combination working in cohesion is vital for a player to realise their potential. The role of the parent/guardian is hugely important and one often undervalued and overlooked when looking at a players’ development.
Whilst the player and coach role are well-defined the role of the parent is one where I believe we can lack clarity of the role and even neglect an Important stakeholder in the process. A parent plays a key role in terms of logistics (getting the player to practice and on time) a source of unwavering support through periods of success and disappointment and finally to manage expectation. As a coach I would also say the coach can also support in these areas but a parent/guardian spends far more time with the player so is better placed to lead on the holistic support of the player.

A coach’s role
A coach’s role is obviously to teach and guide the player but another often undefined role is to ensure an open line of communication with the parent.
Just like understanding the ‘why’ in terms of the individual, helping a parent (and player) understand the ‘why’ in what you are doing for their development and providing a rationale for sessions/guidance provides a parent with vital information in which they can build on and reinforce with the player.
With an open line and a built trust a coach and parent can openly share information which can really benefit a player’s development.

“Be open and approachable to parents, establish a line of communication and in turn a trust and honesty”

The journey not the destination
To often the destination can be the focus rather then the journey. The issue this can cause is that by fixating on the end goal the journey can often be neglected. The journey to greatness (and to give context, greatness I’d define as realizing and maximizing your full potential and building a lifetime love and participation of the game whether that’s Premier League or Dorset Premier League) the journey is a long one with many highs and lows along the way.
Development is a step by step process, year-on-year and the coach and the parent have an important role to play in ensuring the love and enjoyment of the game and the individual has the desire to travel through the pathway.
Unfortunately players exit the sport early, some of the reasons I see are a lack of patience, a player gets to 12 for instance, isn’t where they (or the parent) want to be, and they either begin jumping from club to club, coach to coach in search of the dream they are chasing, or they (or the parent) lose interest, and they drift away. Displaying patience and understanding the ‘sort term gain, long term pain’ philosophy is really important and conducive to long term enjoyment and development. Another key driver i see in an early exit from the sport is pressure. Pressure from the coach and pressure from the parent to consistently perform at the very top of their ability. Whilst this should always be the aim for the player human nature dictates that perfect performances game in, game out aren’t possible.
If the key expectancy is to enjoy and to give close 100% as possible and that mistakes aren’t going to be met with reprisal this will take an enormous weight of the players shoulders and ironically lead could to better performances anyway.
Lastly resist the urge to compare journeys with other people. Some players end up in a system at 8 years old (Mason Mount as an example) and some end up coming in late through non league (Tyrone Mings, Charlie Austin both turned professional in their early 20s) they key is to not look at someone else and think your son/daughter is behind or ahead. The player competes only against themselves not anyone else and throughout their journey opportunities will present themselves at given times.

The car journey home
The car journey home is a great opportunity to enforce your belief in your son/daughter. As a father myself of a netball and tennis player the temptation is always to pick apart the performance and go into great depths to explain your view point. As tempting or as necessary we feel this maybe it can often be the wrong time. If the player is disappointed or it didn’t go as they hoped the last thing they want is to relive the game though a critical lens (even if it’s not I can feel that way!) I would always be an advocate that the first question is did you enjoy it and did you have fun? After all when we strip everything back whether they’ve just played in the World Cup or a pre season friendly enjoying what you do has to be at the forefront of our thoughts. Enjoyment of the game is a central part of good performance, and in my opinion the last 10% which separates the good/great from the average.
I tend to find the better level the player plays at the less enjoyment is valued and often scoffed at as a glib question when and more clinical performance related questions should be asked. It may even be a change of subject and the game isn’t discussed at all, sometimes taking the players mind off things could be what they need, especially straight after competition
After games emotion can run high and our opinions can often be magnified. I prefer to not speak too much after games (I say this with my parent and coaches hat on!) but instead go into greater detail at the next training night when I can approach the player/group with a clear mind after taking time to reflect. As a parent I would also be reticent to share my thoughts on technical detail as this could conflict with the message from the coach. Speaking again as a parent of sports playing children Im a believer in leaving the detail to the coach (unless I’m enforcing the coaches’ message) and instead focusing on helping them enjoy the sport, and supporting them through good times and bad.

Keep perspective
In reality only a small number of individuals make it to the very top, whilst I would always encourage players to have a dream and a goal as coaches and parents I believe we should also carefully manage expectation.
Going back to the journey over destination section, let’s enjoy every step of the journey and the highs and the lows and help the player maximize their potential.

“True success should be reaching and maximizing one’s potential”

Be accountable
Another really important trait in sport (and life for that matter) is to be accountable. Whilst the natural instinct is to always protect the player, making excuses for them alleviates them from taking responsibility and is counter-productive to their long term development as people and players. One of my disappointments is when I hear no one passed them the ball, the team isn’t good enough around them, doesn’t know how to play the position, pitch was poor, sun was in their eyes and the ref was rubbish! Whilst at times some of these may indeed be factors making mistakes and not performing to the level they’d like is part of parcel of development and life. To succeed in anything takes perseverance and resilience, and by making excuses these key character traits aren’t developed.
Mistakes are part of learning and life so let’s accept, learn, grow and move on!

“Mistakes are part of learning and life so let’s accept, learn, grow and move on”

Conclusion
The triangulation between players, parents and coaches is a hugely important combination and the relationship between all three stakeholders is key to a player’s development. An open line of communication, an understanding of our roles, honesty and trust between all three are essential to the process working to its maximum potential.
In closing my advice to any parent guardian would be, build relationships, be a ‘good traveler’ be patient and enjoy the journey without fixating in the destination, don’t compare to others, understand it is a self competition, focus on enjoyment, encourage the acceptance of mistakes and taking responsibility and see success as realizing and maximizing full potential.